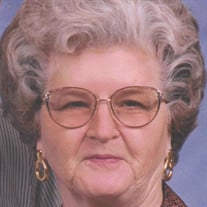 Mrs. Willamae Parker Dillinger, age 86, of Palestine, died Sunday, July 18, 2021, at the Forrest City Medical Center in Forrest City. Her death came sudden and unexpected. Mrs. Dillinger was born October 16, 1934, in Palestine, and was the daughter of Calvin Parker and Verna Rowe Parker. She lived in Palestine most all of her life, was a school secretary and housewife, and was a member of the Palestine Church of Christ. Mrs. Dillinger married Wayne L. Dillinger in 1954, and he preceded her in death in 2019. She is survived by one son, Eric Dillinger, and wife, Paige, of Palestine, two daughters; Jan Waller, and husband, John, of Lawrenceburg, Tennessee, and Teresa Carothers, and husband, Tim, of Adamsville, Tennessee, six grandchildren; Anna, Sara, Emily, Adam, Bailey, and Houston, and eleven great-grandchildren. She had two grandchildren; Beth and Kacy, who preceded her in death. Services for Mrs. Dillinger will be held at Stevens Funeral Home Chapel, 10:00 A.M., Thursday, with burial in Bell Cemetery. Visitation will be Wednesday evening, 6:00 till 9:00 P.M, at Stevens Funeral Home, with Stevens Funeral Home in charge of arrangements. You may log on to stevensfuneralhome.net for the online registry.

The family of Willamae Parker Dillinger created this Life Tributes page to make it easy to share your memories.

Send flowers to the Dillinger family.