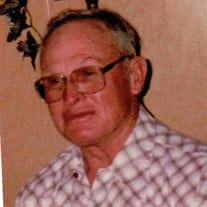 Mr. Vernon Jackson, age 92, of Palestine, died Wednesday, December 19, 2018, at his home in Palestine. Mr. Jackson was born July 10, 1926, in Sharp County, Arkansas, and was the son of Leroy Jackson and Mary Ann Howerton Jackson. He lived in Haynes before moving to Palestine, was retired from the St. Francis County Farmer Association and was a retired farmer. He was a Veteran of World War II, was a member of the American Legion, and was a Baptist. Mr. Jackson married Mary Louise Meyers in 1947, and she preceded him in death in 2014. He is survived by two sons; Roy Jackson, and wife, Debbie, of Forrest City and Robert Jackson of Palestine, three daughters; Ann Mansel of Forrest City, Peggy McClurg, and husband, Ricky, of Gill, and Glenda Anderson, and husband, Tony, of Perry, Arkansas, one brother, James Jackson of McCrory, two daugthers-in-law; Bea Jackson of Forrest City and Michelle Jackson of Cleveland, Ohio, sixteen grandchildren and twenty-nine great-grandchildren. He had two sons; Arthur 'Butch' Jackson and Milton Jackson, three sisters; Lille Mae Nold, Louise Myers, Joan Parrish, one brother, Everett Jackson, son-in-law, Roger Mansel, and three grandchildren, all preceded him in death. Services for Mr. Jackson will be held at Stevens Funeral Home Chapel, 2:00 P.M., Saturday, with burial in Forrest Park Cemetery. Visitation will be Saturday, beginning 1:00 P.M., until the time of the service, with Stevens Funeral Home in charge of arrangements. You may log on to stevensfuneralhome.net for the online registry.

The family of Vernon Jackson created this Life Tributes page to make it easy to share your memories.

Send flowers to the Jackson family.