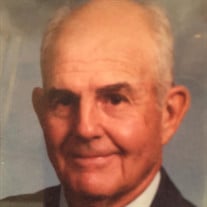 Mr. Vance Edwin Beasley aged 102 of Heth, Arkansas, unexpectedly passed away in the wee hours at his home Saturday morning, September 29, 2018. The rural community where he was born near Heber Springs, Arkansas in 1916 is now under the waters of Greer’s Ferry Lake. His parents were C.J. & Bessie Emma Beasley who moved their family to Heth in 1926 and who predeceased him along with his wife, Elizabeth Bernadine Payne Beasley, four brothers; Ray Beasley, Lewis Beasley, Carl J. Beasley, Harry E. Beasley; one sister Freida Beasley Dorris. He is survived by three children; Bess Beasley Fogg, Jobelle Beasley Johnston and Samuel David Beasley; three beloved granddaughters and numerous great grandchildren; a sister Bess Beasley Wells; a first cousin Charles Martin and numerous beloved nieces, nephews and their children. He is also survived by three loving and dedicated caregivers, Lavern Robbins, Rita Franks and Rebecca Richards. A Graduate of the University of Arkansas and a child of the Great Depression, his professional career extended from teaching vocational agriculture to high school students in Southwest Arkansas through farming in the Delta. Striving all the while to instill good character and values through constructive work in his children and all young people with whom he came into contact. Gifted with an extraordinary intellect and a mechanical engineering brain, he was forever a teacher. Although he had been disabled from a fall 4 plus years ago, his stated goal was to live to be 108. His colorful and storied life leaves much to be commented on and will likely be detailed in print. He was a Christian man and a very straight, no nonsense of excuses, arrow. We were blessed to have him with us as long as we did. There will never be another like him. We shall miss him and our mom all of our days!! Graveside funeral services will be held Saturday, October 6, 2018 at 9:30 a.m. at Forrest Park Cemetery in Forrest City, Arkansas. A memorial service will follow at 11:00 a.m. at the Hughes First United Methodist Church in Hughes, Arkansas. In lieu of flowers memorials may be made to the Hughes First United Methodist Church, Hughes, AR 72348, Visit online registry at stevensfuneralhome.net.

Mr. Vance Edwin Beasley aged 102 of Heth, Arkansas, unexpectedly passed away in the wee hours at his home Saturday morning, September 29, 2018. The rural community where he was born near Heber Springs, Arkansas in 1916 is now under the waters... View Obituary & Service Information

The family of Mr. Vance Edwin Beasley created this Life Tributes page to make it easy to share your memories.

Send flowers to the Beasley family.