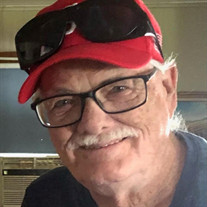 Thomas Marvin Peterson, (Tommy), age 76 of Forrest City, AR passed away February 24, 2021, at the St. Vincent's Hospital in Little Rock. He was born April 23, 1944, in Shreveport, LA.  He is survived by his loving wife of 50 years, Della Ashley Peterson, two daughters; Robin Peterson Scheiderer (Will) of Bella Vista, AR and April Peterson Guerrero (Pancho) of Cherry Valley, AR,  His 5 grandchildren, Madeline Scheiderer Krusz (Jacob) of Orlando, FL, Anastacia and Isabella Guerrero, Becca Scheiderer and his namesake and only grandson, Sawyer Thomas Guerrero. His Siblings Richard Peterson of Little Rock, AR and Emma Peterson Miller of Rogers, AR and close family friend Tammy Watlington.  He was preceded in death by his Parents Edgar Allen Peterson III and Elizabeth Ballew Peterson.  Tommy grew up in Forrest City and graduated from Forrest City High School. He was in the Air Force reserves. Upon honorable discharge, he worked 37 years at Yale Hoists. He married Della Ashley, September 5, 1970. He was a thoughtful, gentle and kind man to all. Happy natured and easygoing. He was tender hearted and sentimental. He was deeply loved by his wife, children and grandchildren. He loved History and Westerns and sci fi movies and good food. He had beautiful white hair and blue eyes and smiled often. He loved being with his wife. He liked to listen to news talk radio and to listen to sermons from Bellevue Baptist. His life is a testament to his Christian faith. He was never a judgmental person. He was fair and easy to talk to. He was generally a quiet guy, unless a topic was discussed that he was passionate about, then he simply spoke loudly and from the heart. It was just common sense to him.  As a believer in Jesus Christ and in his faith, he is no doubt enjoying his ultimate reward.   His life will be celebrated 11:00 am, Saturday, March 6, 2021 at Feltner Assembly of God Church, 693 CR 231, Cherry Valley, Arkansas, 72324.  Lunch will be provided after the service. Stevens Funeral Home is in charge of arrangements. You may log on to stevensfuneralhome.net for the online registry.

The family of Thomas Marvin 'Tommy' Peterson created this Life Tributes page to make it easy to share your memories.

Send flowers to the Peterson family.