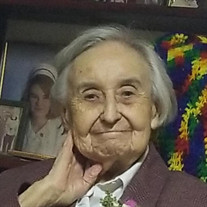 Thelma Inez Brecheen Long, age 98, of Palestine, Arkansas, passed away Sunday, November 29, 2020, at her home in Palestine. She was the daughter of Alexander Foster Brecheen and Bertie Lee Loper Brecheen. Mrs. Long was born March 12, 1922, in Greensburg, Louisiana. She served her country in the Women's Army Corp during World War II attaining the rank of Sergeant. She loved her Lord and was a faithful member of the Elizabeth Primitive Baptist Church until her failing health prevented her from attending. Mrs. Long married Wilman T. Long in 1946, and he preceded her in death in 1991. She is survived by two sons and four daughter-in-laws; Tommy Long, and wife, Alice, of Forrest City, Darrell Long, and wife, Jeanne, of Hammond, Louisiana, Ann Long (Larry), of Palestine, and Vickie Long (Harold), of Destrehan, Louisiana, two brothers; Alex Brecheen, and wife, Earlene, of Bee Branch, Arkansas, and Jerrel Wayne Brecheen, and wife, (Donna), of Forrest City, one sister, Betty Gray, and several grandchildren, great-grandchildren, great-great-grandchildren, great-great-great-grandchildren, nieces and nephews. She was preceded in death by her step-mother, Rosie Brecheen, three sons; Edward Long (still born), Harold Long and Larry Long, three brothers; David Brecheen, Robert Brecheen, and Marion Brecheen, and one sister, Wilma Smith. Besides being a wonderful mother and grandmother she was a wonderful cook. She could prepare three meals a day for five to twenty people with little notice, including homemade biscuits, pies, cakes, cookies and popcorn between meals, plus time to play hide and seek and read books to the grandchildren. Mrs. Long was always the caregiver which was really hard on her when people had to care for her. Mrs. Long held a few jobs outside of her life of working on the farm including the Van Heusen factory in Brinkley and as a cafeteria worker with the Forrest City School District. The family would like to thank the Veterans Administration and Kindred Hospice for all of the services they have provided for Mrs. Long. We would especially like to thank Emily Sparkman for all of her care that she had given. Most of all we would like to thank Ann Long for everything that she has done and sacrifices that she has made to be there for our Mom. She was like the daughter that Mom didn't have. Services for Mrs. Long will be held at Stevens Funeral Home Chapel, 2:00 P.M., Tuesday, with burial in Bell Cemetery. Visitation will be Tuesday, beginning 1:00 P.M., until the time of the service. Elder Ray Churchwell, assisted by Hillmon Davis, and Diesel Long, will be officiating the service. Stevens Funeral Home is in charge of arrangements. You may log on to stevensfuneralhome.net for the online registry.

The family of Thelma Inez Brecheen Long created this Life Tributes page to make it easy to share your memories.

Send flowers to the Long family.