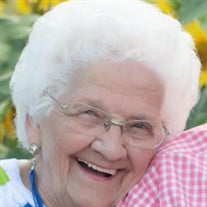 Syble Rice McCain, 94, was called peacefully to her heavenly home on February 10, 2022, with her daughter by her side and a smile upon her face. Syble was born March 4, 1927, in St. Charles, Missouri, to Frank and Dora Mae (Calvert) Rice. The eldest daughter of eight children, she spent her childhood in Moro, Arkansas. She left school after tenth grade to help support her family, and at age 13 trained to become the dental assistant to Dr. Harold Mattice of Mariana, Arkansas. “Doc” and Mrs. Mattice became her surrogate parents whom she deeply loved. Following the war, she cleaned the teeth of a handsome young soldier who asked her for a date that very night and would become her husband of 71 years. Syble and Captain Isaac Francis McCain were married in 1949 and made their home on their farm in Widener. They had one daughter, Joan Collier (Ed) of Forrest City and one son, Isaac Francis McCain, Jr. (Ike), who preceded her in death in 1969 at the age of 16. Syble was known for her kindness and generosity. She tended a large garden on the farm and found joy delivering fresh fruits, vegetables, and beautiful flowers to all who would enjoy them. A talented seamstress and cook, she shared her gifts throughout the county. Syble displayed her love of Christ through her heart for service to others. She was an avid golfer and a founding member of Ridgecrest Country Club. She enjoyed golfing with her friends throughout Eastern Arkansas, who often left their games with some of Syble’s freshly shelled peas or homegrown tomatoes. Syble worshipped at the Widener Methodist Church until it closed, then she joined the First United Methodist Church in Forrest City, where she loved to attend with four generations of her family. Syble’s greatest joy was her family. She was proud to be the dedicated mother, grandmother, and great-grandmother of a loving family, whom she would gather for her famous Sunday lunches and always served everyone’s favorites. She adored her three great-grandchildren and was blessed to have them near and watch them grow. Syble’s heavenly homecoming reunites her with her husband, Francis, who preceded her in death in 2020, and her beloved son Ike. She is survived by her daughter Joan Collier (Ed), two granddaughters, Kristen Wright (Marshall) and Lauren Brookman (Eric), and three great-grandchildren, Collier Wright, her namesake Syble Wright, and Sophie Grace Brookman, all of Forrest City. A graveside service will be held at Forrest Park Cemetery on Sunday, February 13, 2022, at 2:00p.m. Stevens Funeral Home is in charge of arrangements. You may log on to stevensfuneralhome.net for the online register. In lieu of flowers, the family suggests that memorial gifts made be made to First United Methodist Church in Forrest City, or to continue her legacy of service through the Syble and Francis McCain Endowment for Charitable Giving at the St. Francis County Community Foundation, P.O. Box 3002, Forrest City, AR 72335. Blessed are the pure in heart, for they shall see God. Matthew 5:8

Syble Rice McCain, 94, was called peacefully to her heavenly home on February 10, 2022, with her daughter by her side and a smile upon her face. Syble was born March 4, 1927, in St. Charles, Missouri, to Frank and Dora Mae (Calvert) Rice.... View Obituary & Service Information

The family of Syble Rice McCain created this Life Tributes page to make it easy to share your memories.

Syble Rice McCain, 94, was called peacefully to her heavenly...

Send flowers to the McCain family.