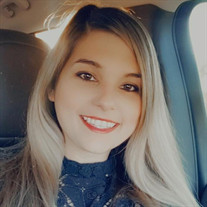 Samantha L. Townsend, age 30, of Southside, Arkansas, died Saturday, January 23, 2021, sudden and unexpected in an ATV accident. Mrs. Townsend was born July 20, 1990, in Wynne, Arkansas, and was the daughter of Sammy Smith and Debbie Davis. She moved to Southside seven years ago from Colt, and worked for the United States Postal Service in Bradford, Arkansas. Mrs. Townsend married SSG. Parks L. Townsend and he preceded her in death in 2020. She is survived by two sons; Chase Townsend and Jackson Townsend, both of the home, one step-daughter, Paisley Kelly of Cave City, her mother, Debbie Davis of Colt, her maternal-grandfather, Scott Davis, and wife, Lou, of Colt, her mother-in-law, Mary Ann Townsend of Madison, her uncle and aunt, Scott and Christy Davis, of Hornlake, Mississippi, a special Uncle/Daddy, Ricky Smith, and several other special uncles, aunts, and cousins. Services for Mrs. Townsend will be held at Stevens Funeral Home Chapel, 2:00 P.M., Thursday, with burial in Loughridge Cemetery. Visitation will be Thursday, beginning 1:00 P.M., until the time of the service. Stevens Funeral Home is in charge of arrangements. You may log on to stevensfuneralhome.net for the online registry.

The family of Samantha L. Townsend created this Life Tributes page to make it easy to share your memories.

Send flowers to the Townsend family.