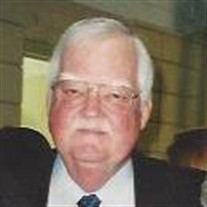 Royce McEuen of Forrest City, Arkansas, went to his heavenly home on Monday, February 19, 2018 surrounded by his loving family. He was born in Benton, Arkansas, to Wylie and Daisy McEuen on December 3, 1938. His family moved to Little Rock where Royce attended school and graduated from Little Rock Central High School in 1955. After graduation from high school, he went to work for Southwestern Bell Telephone Company in the mail room. Shortly after starting work he met his wife Bonnie Stewart of Mountain View, Arkansas who had just completed her studies and begun employment in the plant department stenographers pool of that same company. That was the beginning of 60 happy years of marriage for Royce and Bonnie McEuen. Royce was the proud father of three children: Randy, Tim, and Cindy. Royce loved his children dearly. He taught them love, kindness, tolerance, a good work ethic, love of community, and a love of the Lord. He thought the boys should be able to fix cars and anything around the house. So, he bought Randy and Tim “clunker cars” on which they spent many hours working together under “a shade tree” while laughing and learning to take care of Dad's tools “or else”. Cindy was the typical daddy's little girl. He thought she should be able to check all the fluids in her car, but he made sure she kept the roadside assistance telephone number available at all times. Royce had a great love of music of all kinds. He taught his children to love and appreciate it. They had such fun singing and listening to music. As much as he loved his family, there was a special love he felt for his grandchildren; Kandas, Bonnie, and Holly and his great-grandchildren: Kyle, Trinity, Wesley, Sarah, Ryan and Kaylee. He always thought they needed a twenty dollar bill when they came to visit and took great delight in sending them the occasional twenty in the mail. Royce worked with Southwestern Bell Telephone Company for 35 years before retiring. During those years he served in roles of increasing responsibility between Little Rock, Newport and Blytheville before returning to Little Rock. In 1969 he was transferred to Forrest City where he served as Office Manager with Community Relations Manager responsibilities for several towns in eastern Arkansas. He happily settled into his job, raised his children, and got involved in the community. He and Bonnie were very active in the school system, PTA, United Way, Chamber of Commerce, Rotary Club and the First Baptist Church. His contributions to the community were recognized when he was presented the Paul Harris Fellowship Award from the Rotary Club; elected President of the Chamber of Commerce; and received the Arkansas Development Program Award for the work he did for Forrest City and surrounding areas. He served on many boards with a special interest in serving as PTA president for many years. He enjoyed working with choir parents and encouraging his children in their musical as well as educational pursuits. One of the most important contributions he made was serving at First Baptist Church in various capacities. He loved serving the Lord and was a Sunday School teacher, a deacon, a member of the safety patrol, sponsor of teenagers, and was always willing to serve quietly. He was known affectionately as the “Candy Mann” to all the children of First Baptist Church because he would always be found sitting on his pew with bags of candy for any child who stopped by for a visit. What fun he had on Saturday getting the bags of candy ready for Sunday morning. Mr. Oral Edwards grew tired of Royce's Walmart plastic bag that served as his candy carrier and presented him was an Arkansas canvas bag. Royce is survived by his wife Bonnie (Stewart) McEuen who loved him dearly and made a home for him and their family for 60 years; his sons Randy of Houston, Texas, Tim and wife Kim of Jonesboro, Arkansas, and daughter Cindy McEuen and Billy Whitener of Bradford, Arkansas; his grandchildren Kandas (Timmy) Crawford of Paragould, Arkansas; Bonnie Aspedon of Cabot, Arkansas; and Holly McEuen of Jonesboro, Arkansas. He is also survived by 6 great-grandchildren; Kyle and Trinity McEuen and Ryan, Kaylee, Wesley and Sarah Crawford of Paragould, Arkansas. Services for Mr. McEuen will be held at the First Baptist Church in Forrest City, 11:00 A.M., Thursday. Visitation will be Thursday, 10:00A.M., until the time of the service at the church. Burial will be in the Meadowbrook Memorial Gardens Cemetery, 3:00 P.M., in Beebe, Arkansas. Memorials are to be made to the First Baptist Church, 507 N. Rosser, Forrest City, Arkansas, 72335. Stevens Funeral Home is in charge of arrangements. You may log on to stevensfuneralhome.net for the on line registry.

Royce McEuen of Forrest City, Arkansas, went to his heavenly home on Monday, February 19, 2018 surrounded by his loving family. He was born in Benton, Arkansas, to Wylie and Daisy McEuen on December 3, 1938. His family moved to Little Rock... View Obituary & Service Information

The family of Royce McEuen created this Life Tributes page to make it easy to share your memories.

Royce McEuen of Forrest City, Arkansas, went to his heavenly...

Send flowers to the McEuen family.