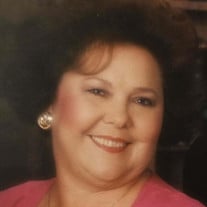 Mrs. Patsy Pauline Prier, age 81, of Morrilton, AR, formerly a long time resident of Forrest City, died Sunday, March 3, 2019, at Johnson Regional Medical Center in Clarksville, AR. Mrs. Prier was born December 5, 1937, in Pine Tree, Arkansas and was the daughter of Ray McKee and Edna Ellis McKee. She worked at Kemp Pharmacy in Forrest City for 35 years and was a member of Emmanual Baptist Church. Mrs. Prier married Bill Prier in 1975 and he survives her along with one daughter, Michelle Quinn of Morrilton, one son, Rodney Holman of Pine Tree, one brother, Jimmy Ray McKee of Pine Tree, one sister, Barbara Caudle of Colt, three grandchildren, Kayley Holman, Gunner Holman, and Megan Lacefield, and three great-grandchildren. She had one son, Randall Holman and one granddaughter, Kandis Davis, who preceded her in death. A Memorial service will be held at Stevens Funeral Home Chapel, 11:00 A.M., Thursday, March 7, 2019. Stevens Funeral Home is in charge of arrangements. You may log on to stevensfuneralhome.net for the online registry. In lieu of flowers the family request memorials be made to the Alzheimer's Association at Alz.org.

The family of Mrs. Patsy Pauline Prier created this Life Tributes page to make it easy to share your memories.

Send flowers to the Prier family.