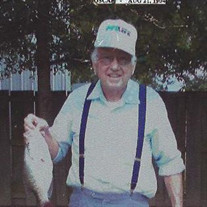 Mr. Oscar Harvey Martin, age 89, of Palestine, passed away at his home, September 30, 2017, after an extended illness. He was born in Swifton, Arkansas, October 25, 1927, the son of 'Pete' and Rosie Due Martin. Mr. Martin served in the Army and was stationed in Korea for two years. Upon returning home he met his love of sixty-four years, Elizabeth Ann Prince and they married in 1953. Mr. Martin was a member of the Cumberland Presbyterian Church in Palestine and a lifelong member of the V.F.W. He was a member for sixty-four years of the Forrest City Lodge #198. He was a very active member of the Eastern Arkansas Scottish Rite Bodies where he attained the rank of 33rd Degree Mason. He was appointed Degree Master emeritus of the Sixth Degree where he had been an accomplished ritualist for many years. He was preceded in death by his parents, son, Gary Lynn Martin, brother, Estes Martin, and two sisters; Lois Vanmeter and Kathlene Cross. He is survived by his wife, Elizabeth, son Darrell Martin, and wife, Kathi, of Palestine, one daughter, Mahala Lacefield, and husband, William, of Colt, and a daughter-in-law, Sonja Martin, of Wynne, five grandsons; Jason Martin, Scott Martin, Brian Martin, Todd Lacefield, and Richie Lacefield, four great-granddaughters and one great-great-grandson. Services for Mr. Martin will be held at the Cumberland Presbyterian Church, 11:00 A.M., Tuesday, with burial in Bell Cemetery. Visitation will be Monday evening, 6:00 till 8:00 P.M., at Stevens Funeral Home with Stevens Funeral Home in charge of arrangements. In lieu of flowers memorials are to be made to the Forrest City Lodge #198, P.O. Box 145, Forrest City, Arkansas, 72336 or the Cumberland Presbyterian Church, P.O. Box 98, Palestine, Arkansas, 72372, or memorial of one's choice. You may log on to stevensfuneralhome.net for the on line registry.

Mr. Oscar Harvey Martin, age 89, of Palestine, passed away at his home, September 30, 2017, after an extended illness. He was born in Swifton, Arkansas, October 25, 1927, the son of 'Pete' and Rosie Due Martin. Mr. Martin served in the Army... View Obituary & Service Information

The family of Oscar Harvey Martin created this Life Tributes page to make it easy to share your memories.

Mr. Oscar Harvey Martin, age 89, of Palestine, passed away at...

Send flowers to the Martin family.