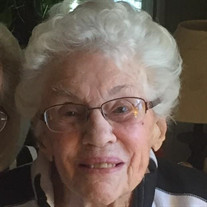 Mrs. Muriel Reynolds, age 96, died on Sunday, January 21, 2018 in Pryor, Oklahoma, in the loving care of her daughter Marilyn Fields. Muriel was born on September 4, 1921, at their summer home on Mohopac Lake, in Mohopac, NY. She grew up in Brooklyn, NY. Her parents were John and Laura Hamilton and her sister was June DeJongh. Muriel was baptized in Carmel, NY in 1938 and was asked to teach junior high school girls Sunday School class shortly after her baptism and continued to teach the Bible into her seventies. She graduated from Adelphi College, Garden City, NY, in 1941, at 19 years of age with a degree in Business Education. Muriel married Roger Reynolds in 1947 in Carmel and they lived together for 61 years. Roger died on November 30, 2008. They lived in Hawthorne, NY, Cochituate, Massachusetts, Houston, TX, and Forrest City, Arkansas. They moved to Forrest City in 1971, and Muriel taught a ladies adult Sunday School Class at the First Baptist Church, and joined the musical coterie, and was involved with a sewing group, and the hospital auxiliary. They were members of the Forrest City Country Club and the First Baptist Church. Muriel moved to Pryor, OK in 2012. Muriel is survived by her daughter Marilyn Fields, and her husband Ken Fields who reside in Pryor, OK, and her son Rick Reynolds and his wife Helen Reynolds who reside in Tampa, Fl. Her grandchildren are Travis Fields, Pryor, OK, Tyler Fields, Harlem, NY, Chad Reynolds, Memphis, TN and Nikki Fulp, Tampa, FL. Her great-grandchildren are Hudson Fields, Christian and Liam Reynolds, and Emmie Fulp Graveside services will be held Wednesday, January 24, 2018 at 10:30 a.m. at Forrest Park Cemetery in Forrest City. Visit online registry at stevensfuneralhome.net.

Mrs. Muriel Reynolds, age 96, died on Sunday, January 21, 2018 in Pryor, Oklahoma, in the loving care of her daughter Marilyn Fields. Muriel was born on September 4, 1921, at their summer home on Mohopac Lake, in Mohopac, NY. She grew up in... View Obituary & Service Information

The family of Mrs. Muriel Reynolds created this Life Tributes page to make it easy to share your memories.

Send flowers to the Reynolds family.