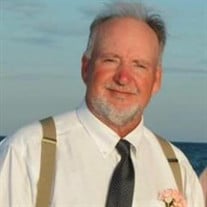 Mr. Kenny Taylor, age 56, of Hughes, died Monday, December 17, 2018, at the St. Bernard's Hospital in Jonesboro. His death came sudden and unexpected. Mr. Taylor was born April 25, 1962, in West Memphis, and was the son of Kenneth Wade 'Pete' Taylor and Louise Funderburg Taylor. He lived in St. Francis County most all of his life, was a truck driver, a Veteran of the Army, and a member of the Central Baptist Church in Hughes. Mr. Taylor married Sherry McCartney in 1988, and she survives him along with one son, Jonathan Taylor, and wife, Danielle, of Senatobia, Mississippi, one daughter, Jessica Taber, and husband, Michael, of Jonesboro, one brother, Terry Taylor, and wife, Natalie, of Horse Shoe Lake, three sisters; Judy Cox, and husband, Joe, and Debra Alexander, all of Hughes, and Brenda Griggs, of West Memphis, and two grandchildren; Graham and Ainsley. Services for Mr. Taylor will be held at Stevens Funeral Home Chapel, 10:00 A.M., Friday, with burial in Forrest Park Cemetery. Visitation will be Thursday evening, 6:00 till 8:00 P.M., at the funeral home, with Stevens Funeral Home in charge of arrangements. You may log on to stevensfuneralhome.net for the online registry.

The family of Kenny Taylor created this Life Tributes page to make it easy to share your memories.

Send flowers to the Taylor family.