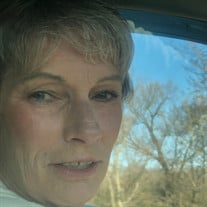 Kathy Lynn Wilson Flowers, age 60, of Brookland, Arkansas, died Monday, June 29, 2020, in Jonesboro. Her death came sudden and unexpected. Kathy was born January 7, 1960, in Fordyce, Arkansas, and was the daughter of Henry Franklin Wilson and Lille Jane Pennington Wilson. She was a secretary for Staton's Home Furnishings and was a Baptist. Kathy is survived by one son, Danny Flowers, and wife, Brittney, of Brookland, Arkansas, four sisters; Judy Saeler of Kingsland, Arkansas, Francis Gilbert, Patsy Marsh, and Sharon Mitchell, all of Sheridan, three brothers; Charles Wilson, Franklin Wilson, and Marvin Wilson, all of Fordyce, two grandchildren; Nicole and Alyssa. She was preceded in death by two brothers; Buddy Pennington and Tommy Wilson, three sisters; Dorothy Nolan, James Saeler, and Virginia Gilbert, and her parents. A memorial service will be held Tuesday, 2:00 P.M. at Stevens Funeral Home. Visitation will be Tuesday, beginning 1:00 P.M. until the time of the service. Stevens Funeral Home is in charge of arrangements. You may log on to stevensfuneralhome.net for the online registry.

The family of Kathy Lynn Wilson Flowers created this Life Tributes page to make it easy to share your memories.

Send flowers to the Flowers family.