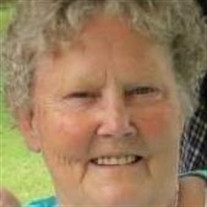 Mrs. Jewell Barnes, age 80, of Forrest City, died Thursday, April 15, 2021, at her home in Forrest City. Mrs. Barnes was born April 7, 1941, in Forrest City, and was the daughter of William Harvey Smith and Ethyl Lucille Kimble Smith. She lived in St. Francis County all of her life, was a housewife and had been an employee of Reltoc and Walmart, and was a member of the Emmanuel Baptist Church. Mrs. Barnes married Edmond Thomas Barnes Sr. in 1972, and he preceded her in death in 2005. She is survived by four sons; Robert Smith of the home, Edmond Barnes Jr., and wife, Amanda, of Pine Tree, Jimmy Heath, and wife, Peggy, of Searcy, and Glenn Sweeney, and wife, Brenda, of Viriginia, two daughters; Jennie Williams, and husband, Stanley, of Colt, and Deborah Brimhall of Forrest City, three sisters; Joy Owens of Hardy, Ethel Jean Thomas and Thelma Fryer, both of Forrest City, four grandchildren; Alayna Barnes, Gunner Brimhall, Wendy Heath, and Abbie Light and four great-grandchildren. She was preceded in death by her son, Paul H. Brimhall, one daughter, Sandra K. Smith, two brothers; W. H. 'Billy' Smith and J.O. Smith, and one sister, Margaret Zane. Services for Mrs. Barnes will be held Graveside, 10:00 A.M., Saturday, at the Forrest Park Cemetery. Stevens Funeral Home is in charge of arrangements. You may log on to stevensfuneralhome.net for the online registry.

The family of Jewell Barnes created this Life Tributes page to make it easy to share your memories.

Send flowers to the Barnes family.