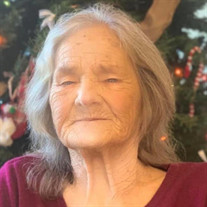 Jeanette Faye Papke, age 83, of Forrest City, died Monday, March 7, 2022, at the Baptist Health Medical Center in North Little Rock. She had been in poor health for the past two years. Mrs. Papke was born January 29, 1939, in Cave City, Arkansas, and was the daughter of Sila Martin and Thelma Duncan Martin. She lived in Forrest City most of her life, was a housewife and had been an employee of General Industries, and was a member of the Landmark Missionary Baptist Church. Mrs. Papke married Glen Allen Shackleford in 1962, and he preceded her in death in 1973. She married Roger Papke in 1981, and he preceded her in death in 2007. She is survived by one son, Danny A. Shackleford, and wife, Vickie, of Forrest City, one sister, Linda Cox of Heth, three grandchildren; Amber, Kelsey, and Carrie, and six great-grandchildren. She had five brothers; Ocie Dean Martin, Johnny Martin, James Hubert 'Hub' Martin, Thomas J. Martin, and Little Brother, four sisters; Hazel Duncan, Edith Cooley, Carolyn Fusher, and Virginia Holden, all preceded her in death. Services for Mrs. Papke will be held at Stevens Funeral Home Chapel, 11:00 A.M., Thursday, with burial in Forrest Park Cemetery. Visitation will be Wednesday evening, 6:00 till 8:00 P.M., at Stevens Funeral Home, with Stevens Funeral Home in charge of arrangements. You may log on to stevensfuneralhome.net for the online registry.

The family of Jeanette Faye Papke created this Life Tributes page to make it easy to share your memories.

Send flowers to the Papke family.