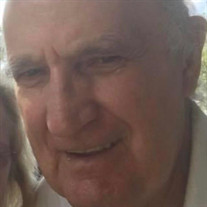 Mr. James Thomas "Lefty" Billings, 83, of Wynne, Arkansas, died on Saturday, July 10, 2021, at Forrest City Medical Center. James was born in Wynne, Arkansas, on October 3, 1937, to the late Lester and Lou Ola Hall Billings. He owned Billings Oil Company and a Kids Care, child care center. He played Quarterback for Arkansas State University, setting many records and earning him the nickname "Lefty". He was an avid domino player and quail hunter. James served many years on the Wynne Water Board and City Council. He is survived by his wife, Pamela Bradley Billings of the home, daughter, Kelly Taylor and husband Jack of Fort Collins, Colorado, sister, Judith Pool of North Hampton, Massachusetts, stepchildren, Brad Johnson of Marion, Sanders Johnson of West Memphis, Paul Johnson of Wynne, Russell Johnson of Texas, Geri Flores of Marion, and 12 grandchildren. He was preceded in death by his parents, Lester and Lou Ola Billings and daughter, Lynn Billings in 2021. A graveside service will be held on Thursday, July 22, 2021, at 11 AM, at Crosslawn Cemetery.

The family of James Thomas Billings created this Life Tributes page to make it easy to share your memories.

Send flowers to the Billings family.