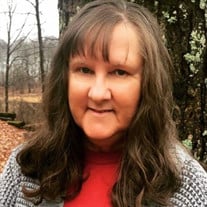 Mrs. Elvia Ella Wilkinson, age 63, of Forrest City, died Friday, July 13, 2018, at her daughter's home in Conway. Her death came sudden and unexpected. Mrs. Wilkinson was born December 31, 1954, in McCrory, and was the daughter of Charlie Henry Risner and Katie Loraine Griffin Risner. She lived in St. Francis County most all of her life, was retired from Sanyo Manufacturing, and was a member of Oak Hill Church of God. Mrs. Wilkinson married Michael Allen Wilkinson and he survives her along with one son, Michael Allen Wilkinson II, and wife, Rachael, of Phoenix, Arizona, one daughter, Katelyn Nicole Wilkinson of Conway, one brother, Charles James Risner of Garland, Texas, six sisters; Mary Gnader of Forney, Texas, Viola Burroughs of Wynne, Nina Harris and Shirley Bennett, both of Earle, Debra Barksdale of Hernando, Mississippi, and Lola Feldhaus of Tuscumbia, Alabama, and three grandchildren; Kaylon, Katelyn, and Kandice. Her parents; Charlie Henry Risner and Katie Loraine Griffin Risner, her brother, Allen Edward Risner, all preceded her in death. Services for Mrs. Wilkinson will be held at Stevens Funeral Home Chapel, 10:00 A.M., Wednesday, with burial in Cogbill Cemetery in Wynne. Visitation will be Tuesday evening, 6:00 till 8:00 P.M., at Stevens Funeral Home with Stevens Funeral Home in charge of arrangements. You may log on to stevensfuneralhome.net for the online registry.

The family of Elvia Ella Wilkinson created this Life Tributes page to make it easy to share your memories.

Send flowers to the Wilkinson family.