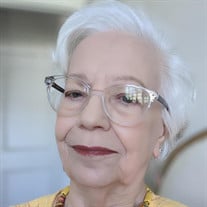 Edna Ann Scott, age 81, of Hernando, Mississippi, died Wednesday, September 15, 2021, at her home in Hernando. Mrs. Scott was born September 25, 1939, in Memphis, Tennessee, and was the daughter of Lawrence Crocker Jolly and Edna Clarcie Pentacuff Jolly Owen. She lived in West Memphis before moving to Hernando. Mrs. Scott is survived by one son, Bart Scott of Memphis, Tennessee, one daughter, Angela Dee Russum of Hernando, Mississippi, two grandchildren; Jake Root and Jessica Pollan, three great-grandchildren; Jude, Aspen, and Brystol, and her favorite grand-dog, Daisy. She had one grandchild, Nikki Root, who preceded her in death. Services for Mrs. Scott will be held Graveside, 11:00 A.M., Friday, at the Forrest Park Cemetery in Forrest City. Stevens Funeral Home is in charge of arrangements. You may log on to stevensfuneralhome.net for the online registry.

The family of Edna Ann Scott created this Life Tributes page to make it easy to share your memories.

Send flowers to the Scott family.