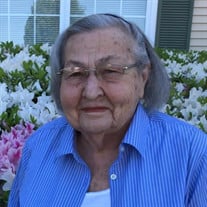 Mrs. Edna B. Brothers age 92, recently of Oxford, Mississippi, passed away peacefully on Sunday, December 12, 2021. She lived for almost 70 years in Forrest City, Arkansas, most of that time at her home in Washington Heights, where in the spring, thousands of daffodils filled her backyard with color. Edna was born on July 11, 1929 in Cincinnati, Ohio. Her parents, Ned and Esther Albonetti Bramucci moved the family to Marion, Arkansas when she was a child. She lived there until she married Alva R. Brothers in 1948, moving to Forrest City shortly thereafter. Edna’s long life had many chapters and she celebrated each one. She was a partner to her farmer husband and a homemaker of many talents. She enjoyed her large Italian family and was happy that her life included her bothers, sisters, many nieces and nephews and their offspring. Edna’s talents and hobbies included baking, crocheting, gardening and traveling. Her chocolate pie and Christmas cookies were legendary. Edna was generous, funny, clever and creative and shared those traits far and wide. People said she was “nice” and a “sweet lady”. It wasn’t an act. She will be missed by many. Edna is survived by her two daughters, Barbara Griffing and husband William Griffing of Dallas, Texas and Patti Marshall and husband Bill Marshall of Oxford, Mississippi, brother Joe Bramucci and sister Della Henry both of Marion, Arkansas. She is also survived by grandson, Wilson Griffing of Dallas, Texas and granddaughter, Annie Edwards of Nashville, Tennessee. She leaves three great grandsons, Danner, Daks and Will and one great granddaughter, Bella. Edna was preceded in death by her husband, Alva, in 1991, as well as her parents, brother Willie Bramucci and sister Tina Smith. A funeral Mass will be held on Monday, December 20, 2021 at 10:00 AM at St. Michael Catholic Church in West Memphis, followed by a graveside service for family and friends at 12:00 noon at Mt. Vernon Cemetery in Forrest City. In lieu of flowers, donations can be made to St. Micheal’s Catholic School in West Memphis, or to charity of your choice. Visit the online registry at Stevensfuneralhome.net.

Mrs. Edna B. Brothers age 92, recently of Oxford, Mississippi, passed away peacefully on Sunday, December 12, 2021. She lived for almost 70 years in Forrest City, Arkansas, most of that time at her home in Washington Heights, where in the spring,... View Obituary & Service Information

The family of Mrs. Edna B. Brothers created this Life Tributes page to make it easy to share your memories.

Send flowers to the Brothers family.