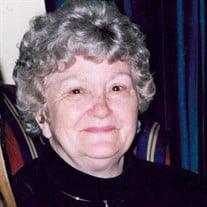 Mrs. Doris Jones Collins, age 91, of Forrest City, died Tuesday, January 29, 2019, at the Crestpark Retirement Inn in Forrest City. Mrs. Collins was born January 10, 1928, in Haynes, Arkansas, and was the daughter of James Jones and Margaret Danehower Jones. She lived in Forrest City most of her life, was a past employee of First National Bank of Eastern Arkansas and had retired from the Forrest City Public School District as a seventh grade math teacher. She had been a member of the Musical Coterie, the First Baptist Church Quilting Group, and had been an art student of Wilma Woods art class. She was in the first graduating class of E.A.C.C. and was an active member of the First Baptist Church. Mrs. Collins married Oscar Collins in 1954, and he survives her along with one son, Ronnie Collins, and wife, Lisa, of Jonesboro, two daughters; Belinda Stafford, and husband, Jim, of Fayetteville, and Carla Hill, and husband, Regan, of Forrest City, and three grandchildren; Alicia, Collin, and Jaynee Claire. She was preceded in death by three brothers; Robert Jones, Hershel Jones, and Clifford Jones, and two sisters; Jimmie Marks and Celia Sparkman. Services for Mrs. Collins will be held at Stevens Funeral Home Chapel, 11:00 A.M., Thursday, with burial in Forrest Park Cemetery. Visitation will be Wednesday, 6:00 till 8:00 P.M., with Stevens Funeral Home in charge of arrangements. Memorials are to be made to the First Baptist Church, 507 N. Rosser, Forrest City, Arkansas, 72335. You may log on to stevensfuneralhome.net for the online registry.

The family of Doris Jones Collins created this Life Tributes page to make it easy to share your memories.

Send flowers to the Collins family.