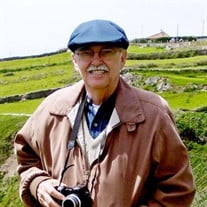 Charles Lamar Bridges, 87, of Forrest City, Arkansas, passed away peacefully at home on August 31, 2021. Born in Elkhart, Texas, to James and Ida Belle Bridges, Lamar grew up playing in the woods, splashing in creeks, and helping grow crops of peanuts, tomatoes, and whatever else would thrive in the red dirt of East Texas. Lamar was inquisitive and adventurous, at one time breaking his leg by trying to make a slide from a blanket and an old dining chair. It soon became apparent that Lamar was not your average young man when at around age 9, after being told it was too hot to light the stove, he proceeded to make a batch of homemade yeast rolls. Lamar excelled as a student and graduated as valedictorian of his high school class in 1952. He earned a bachelor’s degree from the University of Texas at Austin and eventually got a job teaching at Permian High School in Odessa, Texas. While there, he met a fiery redhead named Lynda Parsons at a volleyball game, and he was hooked! They married in 1960 and were as poor as two educators can be. Still, they bought a house, earned their master’s degrees from East Texas State during the summers, and made life-long friends through the Methodist Youth Fellowship they led. In 1966, they flew to Europe, toured around in a blue VW Beetle, and then shipped it back to Texas. Lamar lovingly drove that Bug for the next 20 years. The next year, they adopted a baby girl, just 3 weeks old in Ft. Worth, Texas, and named her Lauri. “The three L’s” moved to Austin, Texas, so Lamar could pursue a PhD in Organic Chemistry. It was Austin in the 70s, and Lamar grew a beard, smoked a pipe, put together a workshop in the back of their rent house, and even crossed paths with LBJ and Ladybird at a play. In his spare time he made toys for Lauri and supplemented their income by painting landscapes and selling them at arts & crafts fairs all over the area. He would, on demand, take Lauri in her pajamas late at night to see “her” capitol building dome so that she would finally go to sleep. After earning his PhD, Lamar eventually landed a position at a small, start-up community college in Forrest City, Arkansas, that was housed in an old Coca Cola bottling plant. Lynda had to sign up as a student in his first class so it would make. Lamar would eventually become Vice President of Academic Affairs at East Arkansas Community College and help it grow exponentially over a 22-year career. A true Renaissance man, he was a sower and maker. He collected seeds and traded cuttings of favorite plants and flowers with ferocity and abundance. He bought one of the first home computers in Forrest City and eventually ended up with multiple computers on multiple operating systems that he programmed and tinkered with “for fun”. He was a well-known cook, even teaching French-bread-making classes to the ladies of Forrest City, and thought store-bought pie crust was a tragedy. At the end of his life, his daughter would watch him move his hands while he slept and swear that he was mixing ingredients for a pie crust. He and Lynda loved to travel, and they did so extensively across the U.S. and Europe. Their favorite trips were with their life-long friends Ray and Carolyn Karrer of Paris, Texas. Between Ray and Lamar there exists a collection of thousands of slides, and both families would like to apologize to all those invited to numerous “slide nights”. Lamar found a new outlet for photography on Facebook and loved posting pictures of his dinners. During the pandemic, these nightly postings were a sign of normality for his friends. Later in his life, Lauri decided he deserved a moniker that was at once current and beloved, and he became “LP” (Little Papa) to those who knew and loved him best. Except in traffic, LP usually spoke and acted with kindness. Asked by his daughter why he hadn’t contacted the young man who bought his beloved Beetle and had failed to pay the balance, he replied, “Well, I think he has a family, and I think he probably needed the money.” Because of that kindness, he leaves behind hundreds of grateful students, a loving church family of First United Methodist Church (where they have been members for over 40 years), and many other family members whose lives he touched both by example and by actions great and small. Of special note are his “second adopted daughter”, Debra West, and “the son he never had”, her husband Rod Risley. He is survived by family members including his brothers Woody and Bobbie Bridges of Elkhart, Texas, and his beloved sister Jimmie Ruth Ives of Palestine, Texas, his loving wife and companion of 61 years, Lynda Bridges, their daughter, Lauri, and numerous nieces and nephews. A memorial service will be held on September 3 at First United Methodist Church in Forrest City, Arkansas, at 11 a.m. with family visitation to start at 10 a.m. The family asks in lieu of flowers that memorials be made to Heifer International, First United Methodist Church of Forrest City, or the St. Francis County Food Pantry. Because LP was a Christian who loved science, the family requests that all service attendees wear masks and maintain social distancing whenever possible.

The family of Charles Lamar Bridges created this Life Tributes page to make it easy to share your memories.

Send flowers to the Bridges family.