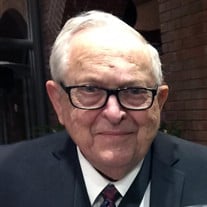 Bob J. Beavers was born March 27, 1933, and departed this life October 24, 2017. He was the son of Ottaway Beavers and Mayme McCollum Beavers. He was born in Lonoke County Arkansas. He was a country boy at heart, Bobby not Robert. He moved... View Obituary & Service Information

The family of Bob J. Beavers created this Life Tributes page to make it easy to share your memories.

Send flowers to the Beavers family.