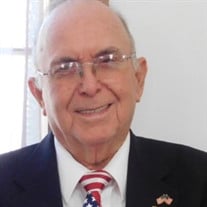 Wylie F. Lindsey, age 81, of Forrest City, died Tuesday, July 2, 2019, at the Forrest City Medical Center in Forrest City. His death came sudden and unexpected. Mr. Lindsey was born April 29, 1938, in Bearden, Arkansas, and was the son of Farris Lindsey and Eddith Clemmens Lindsey Avery. He lived in Forrest City since 1965, was a retired highway engineer after thirty-five years of service, was a Retired Major from the United States Army Reserve, was a member of the Forrest City Lodge 198, the Wynne Chapter 399, the Scottish Rite, the Masonic Knights Templar and was a 32nd Degree Mason. He was a member of the Madison First Baptist Church. Mr. Lindsey married Nancy Y. Foster in 1957, and she survives him along with three daughter; Rev. Elizabeth Lindsey of Higginsville, Missouri, Wylene Whittenton, and husband, Terry, of Forrest City, and Teresa Pate, and husband, Larry, of Marion, eight grandchildren; Joshua, Randal, Lindsey, Parker, Whitney, Landon, Brandi and Samantha and five great-grandchildren; Avery Auston, Caison, Amelia, and River. He had one brother, C. M. Avery, who preceded him in death. Services for Mr. Lindsey will be held at Stevens Funeral Home Chapel, 11:30 A.M., Saturday, with burial in Hughes Cemetery. Visitation will be Saturday, 10:00 A.M., until the time of the Service, with Stevens Funeral Home in charge of arrangements. Memorials are to be made to the ESTRL, 1012 Park Dr., Forrest City, Arkansas, 72335. You may log on to stevensfuneralhome.net for the online registry.

The family of Wylie F. Lindsey created this Life Tributes page to make it easy to share your memories.

Send flowers to the Lindsey family.