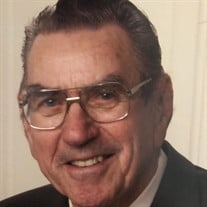 Wilburn Bryan Howton of Palestine departed this life on May 24, 2019. Mr. Howton was born on February 26, 1926 in Salem Community to Henry Howton and Della Mae Henley Howton. He was a retired farmer and had lived in Palestine for most of his life. Wilburn was a firm believer in the death, burial, and resurrection of our Lord and Redeemer, Jesus Christ and was a member of the Palestine Cumberland Presbyterian Church where he attended faithfully. He was also a member of the Masonic Fraternity for over sixty-nine years. He was a member of the Forrest City Lodge No. 198, a member of Forrest Chapter No. 531 Order of the Eastern Star, a member of the Eastern Arkansas Scottish Rite Bodies, York Rite Bodies of Arkansas, the F.I. Scully Council of Allied Masonic Degrees, and a member of the St. Giles Conclave Red Cross of Constantine. Mr. Howton was a recipient of many honors and awards in Masonry including the Grand Lodge Medal of Honor. He truly loved the outdoors and shared that love with family and friends. Many enjoyable, teachable moments were shared while hunting and fishing. Survivors include his children, Linda Jeffrey and husband Michael Jeffrey, Brent Howton and wife Christie Taylor Howton, Wanda Whittenton and husband Joe Whittenton; his grandchildren Carma Jeffrey Meitzen and husband Tim, Alex Jeffrey and wife McKinzie, Seth Jeffrey and wife Laurie, Natalie Howton Barker and husband Jacob, Matthew Howton, Bryan Whittenton and wife Olivia, Will Whittenton and wife Amy, Lucas Whittenton, Anna Horton and Miranda Paulk; great-grandchildren Kale and Booker Jeffrey, Evan, Elizabeth and Eli Jeffrey, Whitt, Jennings and Riggs Meitzen and Aaron Barker. One brother, Keith Howton; three sisters, Audrey Jones, Elnora Adams and Aline Lemons as well as a host of nieces, nephews and friends also survive him. Mr. Howton was preceded in death by his parents; his brothers Odis, Herman and Allen Howton; sisters Irene Reeves and Janis Holt; and the love of his life, his wife of over 67 years, Ruth Gore Howton. Visitation will be held at the Cumberland Presbyterian Activity Center in Palestine Monday, May 27, 2019 from 6-8pm. Services will be conducted at the Cumberland Presbyterian Church in Palestine Tuesday, May 28, 2019 at 10am with Dr. Tommy Thompson and Bro. Jerry Lawson officiating. Burial will follow in the Salem Cemetery. Memorials may be given to the Cumberland Presbyterian Church P O Box 98 Palestine, Arkansas 72372, the Eastern Arkansas Scottish Rite Bodies PO Box 657 Jonesboro, Arkansas 72403 or the charity of your choice. Visit online registry at stevensfuneralhome.net.

Wilburn Bryan Howton of Palestine departed this life on May 24, 2019. Mr. Howton was born on February 26, 1926 in Salem Community to Henry Howton and Della Mae Henley Howton. He was a retired farmer and had lived in Palestine for most of... View Obituary & Service Information

The family of Mr. Wilburn Bryan Howton created this Life Tributes page to make it easy to share your memories.

Wilburn Bryan Howton of Palestine departed this life on May 24,...

Send flowers to the Howton family.