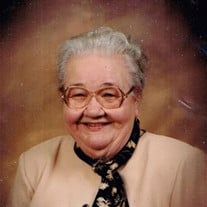 Vivian Pauline Wall, age 94, of West Memphis, Arkansas, passed away Monday, October 29, 2018, in Memphis, Tennessee. Pauline Wall was born December 23, 1923, in Ozark, Arkansas, and was the daughter of Roy and Anna Dane Randolph. She was united with Christ in 1936 and was a member of the First Baptist Church in West Memphis, Arkansas, at the time of her passing. She married Francis C. Wall in 1942. Pauline graduated from Ozark High School and attended Central College for Women. She then graduated from Arkansas State Teachers College, now the University of Central Arkansas. She completed additional study at MSU in Library Science. Pauline was a proud member of the Arkansas school system for 38.5 years, teaching Senior English and later acting as a school librarian. She taught adult Sunday School classes and acted as the church librarian at First Baptist Church for many years. She travelled extensively in the United States, Europe, the Holy Land, and Egypt and visited both Canada and Mexico. Pauline Wall is preceded in death by her husband, Francis C. Wall, and by her son, Francis C. Wall, Jr. 'Binky'. She is survived by her granddaughter, Shanna M. Wall of Memphis. Visitation will be 12 noon Saturday, November 3, 2018, at the First Baptist Church on Missouri Street in West Memphis, Arkansas. The funeral service will be at 1:00 P.M., Saturday, also at the First Baptist Church. Burial will follow in Crittenden Memorial Park in Marion. Brother Josh Hall will be officiating. Stevens Funeral Home is in charge of arrangements. You may log on to stevensfuneralhome.net for the online registry. In lieu of flowers, please send donations to Wonder Junior High, West Memphis Central Office, 301 South Avalon St., South, West Memphis, Arkansas, 72301, Phone 501-735-1915, Check payable to: Wonder Junior High Library Fund, Memo: In memory of Vivian Pauline Wall or Alzheimer and Dementia Center of Memphis, www.adsmemphis.org, Note: In memory of Vivian Pauline Wall.

Vivian Pauline Wall, age 94, of West Memphis, Arkansas, passed away Monday, October 29, 2018, in Memphis, Tennessee. Pauline Wall was born December 23, 1923, in Ozark, Arkansas, and was the daughter of Roy and Anna Dane Randolph. She was... View Obituary & Service Information

The family of Vivian Pauline Wall created this Life Tributes page to make it easy to share your memories.

Send flowers to the Wall family.