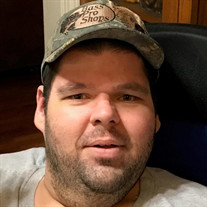 Roy Christopher Jackson, age 37, of Forrest City, died Friday, September 10, 2021, at his home in Forrest City. Mr. Jackson was born November 14, 1983, in Forrest City, and was the son of Roy V. Jackson and Debbie Long Jackson. He lived in... View Obituary & Service Information

The family of Roy Christopher Jackson created this Life Tributes page to make it easy to share your memories.

Send flowers to the Jackson family.