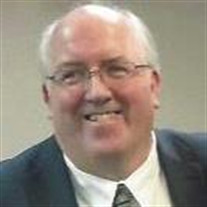 Robert Thomas (Tom) Evans, age 63, of Forrest City, died Thursday, July 26, 2018, at his home after a long illness. Tom was born in Hamilton, Ontario, December 13, 1954, and was the son of William John Dudley Evans and Susan Richardson Evans. He lived in Cambridge, Ontario, before moving to Forrest City in 1978. Tom was a carpenter and owner of Evans Custom Cabinets in Forrest City. He was one of Jehovah's Witnesses where he loved serving and an elder and ministerial servant. Tom is survived by his wife and best friend of forty-one years, Linda, of the home. They had one daughter, Heather Evans Tucker, and husband, Hunter, of Malvern, Arkansas, two granddaughters; Tori Rhea, and husband, Casey, of Prattsville, Arkansas, and Allisa Tucker of Malvern, one grandson, Chase Tucker of Malvern, two brothers; Richard Evans of Cambridge, Ontario, and George Evans of North York, Ontario, two sisters; Susan Gordan and Dale Evans, both of Brantford, Ontario, and a host of nieces and nephews. He was preceded in death by his parents and one brother, James Evans. A special thanks to Patient Choice Hospice for their care and support during Tom's illness. Visitation will be Saturday, August 4, 2018, at the Kingdom Hall of Jehovah's Witnesses, 4489 N. Washington St., Forrest City, Arkansas, 1:00 until 2:00 P.M. A memorial service will follow at 2:30 P.M. at the Kingdom Hall of Jehovah's Witnesses. Stevens Funeral Home is in charge of arrangements. You may log on to stevensfuneralhome.net for the online registry.

The family of Robert Thomas "Tom" Evans created this Life Tributes page to make it easy to share your memories.

Send flowers to the Evans family.