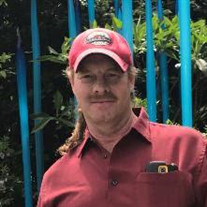 Mr. Richard Earl Cook, age 49, of Forrest City, died Saturday, May 19, 2018, in Forrest City sudden and unexpected. Mr. Cook was born January 13, 1969, in West Memphis, and was the son of J. B. Cook Jr. and Nona Dulin Cook. He lived in Forrest City all of his life and was a master electrician with Cook's Electric. Mr. Cook married Sharon Marie Hale in 1988, and she survives him along with one son, Richard Logan Cook of Jonesboro, one daughter, Lindsey Marie Cook of Wynne, his parents; J. B. Jr. and Nona Cook of Forrest City, one brother, Jason Cook Sr., and wife, Monique, of Forrest City, one sister, Angie Mathes, and husband, Bill, of Forrest City, his father and mother-in-law; John and Margaret Hale of Wynne, and a host of nieces and nephews. He had one brother Jodie Benjamin 'Benji' Cook III, who had preceded him in death. Services for Mr. Cook will be held at Stevens Funeral Home Chapel, 10:00 A.M., Tuesday, with burial in Forrest Park Cemetery. Visitation will be Monday, 6:00 till 8:00 P.M., at Stevens Funeral Home with Stevens Funeral Home in charge of arrangements. You may log on to stevensfuneralhome.net for the on line registry.

The family of Richard Earl Cook created this Life Tributes page to make it easy to share your memories.