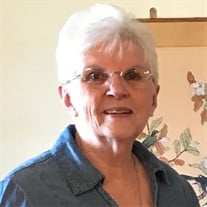 The Reverend Peggy Sue Barry died Friday, April 19, 2019 at Baptist East Hospital in Memphis, TN. Peggy was born November 23, 1935 in Yell County, Arkansas to Sam Bennett and Virginia Sue Light. She married David Hale Barry on March 1959 in Forrest City, and they were married for 54 years. She graduated from Arkansas State Teachers College in Conway. She was an English teacher in Forrest City for over 30 years. Peggy was a member of Delta Kappa Gamma, Chapter AY PEO, and a recipient of the National Endowment for the Humanities. Peggy was also a devout member of the Good Shepherd Episcopal Church where she served on the church vestry, was a member of the choir, and eventually studied to become an ordained priest in an effort to support that parish. Her selfless devotion gave the parish a hope and vision to the future and allowed for the ongoing ministry of the church in Forrest City and St. Francis County. Peggy had a great love of reading & literature. She also had a deep appreciation for the beauty and wonders of nature. Peggy was preceded in death by her parents, Sam & Virginia, her husband David Barry, and two brothers Michael and Jewell Steinbeck. Survivors include her two sons Michael (Elise) Barry, and Russell Barry, grandchildren Jackson Barry and Parker Barry, sister Anna Mae Cooke, and many nieces, nephews, and cousins. A Memorial service will be held at the Episcopal Church of the Good Shepherd on Wednesday at 2:00 p.m. Visit online registry at stevensfuneralhome.net. In lieu of flowers, the family asks that memorials be sent to Episcopal Church of the Good Shepherd Forrest City, Arkansas, or the Cross County Library in Wynne, Arkansas.

The family of Mrs. Peggy Barry created this Life Tributes page to make it easy to share your memories.

Send flowers to the Barry family.