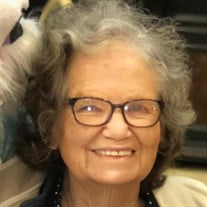 Patricia Hollowell, age 83, of Marion, formerly of Forrest City, died Monday, July 26, 2021, at the Willowbend Nursing Home in Marion. Mrs. Hollowell was born July 2, 1938, in Forrest City, and was the daughter of Fredrick E. Whitted and Eula Mae Whitted Bryant. She lived in St. Francis County most of her life, was a mental health therapist, had a masters degree of science, a member of the Red Cross, the St. Francis County Humane Society, was a St. Jude supporter, and was of the Baptist faith. Mrs. Hollowell married Ben Hollowell in 1954, and he preceded her in death in 2000. She is survived by four sons; Freddie Hollowell, and wife, Kim, of Marion, Patrick Hollowell of Louisiana, Bennie Hollowell of Caldwell, and Don Hollowell, and wife, Theresa, of Davenport, Iowa, one daughter, Jackie Smith of Colt, one sister, Mitzi Bryant of Harrison, Arkansas, fourteen grandchildren and thirteen great-grandchildren, and a host of nieces and nephews. She was preceded in death by one grandson, Dalton Hollowell and two granddaughters; Elizabeth Hollowell and Crystal Hudson. Services for Mrs. Hollowell will be held Graveside, 10:30 A.M., Friday, at the Mt. Vernon Cemetery in Forrest City. Stevens Funeral Home is in charge of arrangements. In lieu of flowers, memorials are to be made to the St. Jude Children's Research Hospital, 501 St. Jude Place, Memphis, Tennessee, 38105. You may log on to stevensfuneralhome.net for the online registry.

The family of Patricia Hollowell created this Life Tributes page to make it easy to share your memories.

Send flowers to the Hollowell family.