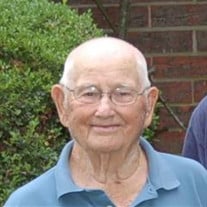 Mr. Orval Coatson Varner, age 98, of Pine Tree, Arkansas, passed away peacefully on Sunday, March 18, 2018. He was born on August 11, 1919 to Sylvester Ellsworth and Alma Henrietta (Barnett) Varner. A proud World War II veteran, he served in Company A, 36th Armored Infantry Regiment of the Army and most notably fought in the Battle of the Bulge. He earned two purple hearts and a bronze star during his military service. Orval will be fondly remembered by family and friends as a loving husband, father, brother, grandfather, great-grandfather, and uncle. He was a beloved member of the Pine Tree community, where he raised his family and lived most of his life. Orval is survived by his two granddaughters, Allison (Varner) Molnar of Irvine, California and Amanda (Varner) Albert of San Diego, California; and four great-grandchildren: Benjamin, Emily, Abigail, and Ainsley. Orval was preceded in death by his wife, Amy (Aldridge); his son, Douglas; his mother, Alma; his father, Sylvester; and five siblings, Lucille Alma Colvin, John Nelson, Vivian Vernice Smith, Ancil Dee, and Robert Lee. Services for Orval will be held Graveside at 11:30 A.M. on Friday, March 23rd at the Barnishaw Cemetery. Visitation will be held prior to the service starting at 10:00 A.M. at Stevens Funeral Home with Stevens Funeral Home in charge of arrangements. Visit online registry at stevensfunerralhome.net.

The family of Mr. Orval Coatson Varner created this Life Tributes page to make it easy to share your memories.

Send flowers to the Varner family.