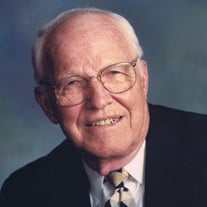 Oral Winston Edwards, 87 of Forrest City, Arkansas, passed away September 29, 2017. He was born November 25, 1929, to Jesse and Grace Ahlf Edwards near Rector, Arkansas. He was preceded in death by his loving wife of 50 years, Christine Austin Edwards.... View Obituary & Service Information

The family of Mr. Oral Winston Edwards created this Life Tributes page to make it easy to share your memories.

Send flowers to the Edwards family.