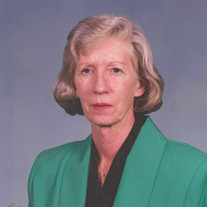 Nancy S. Halbert, age 84, of Palestine, died Saturday, January 25, 2020, at the N.E.A. Hospital in Jonesboro. Mrs. Halbert was born January 10, 1936, in Wheatley, Arkansas, and the daughter of Thomas Murry and Hazel Benefield Stephens. She was a member of the Cumberland Presbyterian Church in Palestine and was a retire teacher. Mrs. Halbert was a member of the Arkansas Teacher Retirement System, the American Legion Auxiliary and the U.C.A. Alumni Association. She served on the 4-H Foundation Board of St. Francis County and was a 4-H Leader for seventeen years. She was named the 2010 Citizen of the year for St. Francis County by Quorum Court Member Charles McGowan, and was the 2012 Grand Marshall for the Palestine Christmas Parade. Mrs. Halbert married Ray Halbert on June 4, 1957, at the Methodist Church in Wheatley. He preceded her in death in 2009 after fifty-two years of marriage. Ray and Nancy were blessed with two children; one daughter, Nancy Le'Ann Ross, and husband, Allen, of Caldwell, one son, Ray Halbert Jr. and wife, Amanda, of Palestine, two grandchildren; Mallory Lee Flowers, and husband, Josh, of Caldwell, and Ray Halbert III, and wife, Tailor, of Cuweta, Oklahoma, and five great-grandchildren; Alana Ann Halbert and Mila Rae Halbert of Coweta, Oklahoma, Sofia Chana Ross, Truxton Allen Flowers, and Teagan Colette Flowers, of of Caldwell. Mrs. Halbert was preceded in death by her parents, her husband of fifty-two years, a granddaughter, Nancy Na'Cole Ross, a great-grandson, Nicholai Caden Ross, and her sister and brother-in-law, Patricia and Carl Dean Stewmon. Services for Mrs. Halbert will be held at the Palestine Cumberland Presbyterian Church, 11:00 A.M., Wednesday, with burial in Bell Cemetery. Visitation will be Tuesday evening, 6:00 till 8:00 P.M., at Stevens Funeral Home with Stevens Funeral Home in charge of arrangements. In lieu of flowers, memorials are to be made to the Palestine Cumberland Presbyterian Church, P.O. Box 98, Palestine, Arkansas, 72372. You may log on to stevensfuneralhome.net for the online registry.

The family of Nancy S. Halbert created this Life Tributes page to make it easy to share your memories.

Send flowers to the Halbert family.