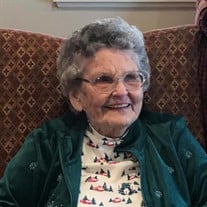 Mrs. Mildred Bernice Pounders, age 96, of Ben Wheeler, Texas, formerly of Colt, died Friday, March 20, 2020, at the Canton Oaks Nursing Home in Canton, Texas. Mrs. Pounders was born December 23, 1923, in Colt, and was the daughter of Henry Ellis Warner and Lily Pearl Cowan Warner. She lived in Colt until moving to Texas, was retired from Sanyo, and attended the First Baptist Church of Caldwell. Mrs. Pounders married Clarence Clayton in 1942, and he preceded her in death in 1973. She married O. E. Pounders and he preceded her in death in 1993. She is survived by two daughters; Carolyn Watts of Fort Worth, Texas and Lola House of Canton, Texas, one son, Clarence Warner Clayton, of Canton, Texas, five grandchildren; Tonya, Michael, Kevin, Bobby, and Laurie, and six great-grandchildren. The funeral service for Mrs. Pounders will be private due to the request from the National Funeral Directors Association and the Arkansas Governor. Friends are encouraged to send flowers and memorials and to visit our online registry at stevensfuneralhome.net for the online registry. Stevens Funeral Home is in charge of arrangements.

The family of Mildred Bernice Pounders created this Life Tributes page to make it easy to share your memories.

Send flowers to the Pounders family.