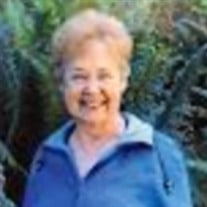 Maxine Sulcer Emerson, age 78, of Bella Vista, Arkansas, formerly of Palestine, died Sunday, October 17, 2021. Mrs. Emerson was born, April 26, 1943, in Palestine, Arkansas, and spent most of her life there before moving to Bella Vista. She was the daughter of Leona and Talmadge Sulcer. She was a beautician before becoming a Registered Nurse. Maxine, (Mamaw), was known for her fierce independence and her relentlessness for standing up for what she believed. She was full of stories and never forgot anyone or anything. She was a caretaker to all her children and grandchildren, and will always be remembered as the matriarch of our family. She was there through every situation, and always willing to offer her advice and two cents (after she had her first cup of coffee). She was confident in her relationship with the Lord. Our hearts are saddened and we will miss her dearly, but we find peace in God as our Savior. Mrs. Emerson married Wallace Emerson on August 5, 1961, and he preceded her in death on August 9, 1990. She is survived by three sons; Mark Emerson and Terry Wade Emerson, and wife, Cyndi, all of Bella Vista, and Wallace Kevin Emerson, and wife, Amy, of Ozark, Missouri, two sisters; Eulene Harbin, and husband, James of Texarkana, Arkansas, and Nancy Bennett, and husband, Robert, of Longmont, Colorado, three grandsons; Dylan, Dustin, and Eli Emerson, four granddaughters; Brittany Ladd, and husband, Daniel, Meredith Sykora, and husband, Zach, Kayla Emerson, and Holly Kate Taylor, and husband, Jeremy, four step-grandchildren, many nephews, nieces, and cousins. Mrs. Emerson loved being a great-grandmother to five great-grandsons and one great-granddaughter. She greatly loved her family and being a part of their lives. Her love of flowers and gardening was evident to all who knew her. She was preceded in death by her parents, two sisters; Carolyn (Billy) Cooper of Palestine, and Marilyn (Butch) Thompson of Colt. Services for Mrs. Emerson will be held at Stevens Funeral Home Chapel, 11:00 A.M., Friday, with burial in Bell Cemetery. Visitation will be Thursday evening, 6:00 till 8:00 P.M., at Stevens Funeral Home, with Stevens Funeral Home in charge of arrangements. You may log on to stevensfuneralhome.net for the online registry.

The family of Maxine Sulcer Emerson created this Life Tributes page to make it easy to share your memories.

Send flowers to the Emerson family.