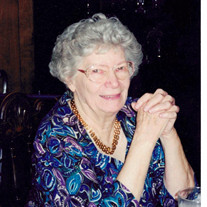 Mrs. Mary Emaline Vardaman Linn, age 96, of Forrest City, died Thursday, March 21, 2019, at her home in Forrest City. Mrs. Linn was born May 30, 1922, in Madison, Arkansas, and was the daughter of G. R. Vardaman and Geneva Eppes Vardaman. She lived in her same home for eighty-three years, was a wife, mother, grandmother, great-grandmother and caregiver, was a long term member of the YMW Club having serviced as president for numerous terms, and was a life long member of the Madison Methodist Church. Mrs. Linn married Caruth Linn in 1948, and he preceded her in death in 2000. She is survived by one son, Darrow Linn Sr. of Moro, Cynthia Linn Clary, Elaine Linn of Forrest City and Margaret Linn Hicks of Hernando, Mississippi, six grandchildren; Mary Linn Brock, Darrow Linn Jr., Emily Hicks, Jack Hicks, William Hicks and Geneva Hicks, and two great-grandchildren; Thomas Long III and Maci Linn. She was preceded in death by her brother, Austin Darrow Linn in 1944. Services for Mrs. Linn wil be held at Stevens Funeral Home Chapel, 3:00 P.M., Friday, March 22, 2019, with burial in Forrest Park Cemetery. Visitation will be Friday, 2:00 P.M., until the time of the service. Stevens Funeral Home is in charge of arrangements. Memorials are to be made to the Madison Methodist Church, 347 SFC 430, Forrest City, Arkansas, 72335. You may log on stevensfuneralhome.net for the online registry.

The family of Mary Emaline Vardaman Linn created this Life Tributes page to make it easy to share your memories.

Send flowers to the Linn family.