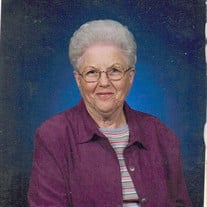 Mary E. Doler, age 91, died peacefully Wednesday, December 26, 2018, at the River Ridge Rehab and Care Facility in Wynne, Arkansas. She was born July 8, 1927, in the small town of Dennis, Mississippi. She was the matriarch of the Doler family, a fifty year resident of Caldwell, and a member of the Caldwell Baptist Church. She was a hard working lady from the time she was five years old, picking and chopping cotton, and finally retiring from Colony Shop in her mid 70's after thirty-five years of service. She was well known though out the Forrest City and surrounding community. She made many friends and met lots of people in sixty plus years in retail sales. She mostly sold women's clothing, from twenty years of service at Grabers Department Store to finally retiring from the Colony Shop. She was preceded in death by her father, Horace A. McClanahan of Forrest City, who was killed during a robbery on Cook Street on March 1964, her husband, Edward J. Doler, who died a week later at age of 41. It was a tough time for her, but she was a tough lady. She had to raise two children, ages one and three, by her self, which she did. She was also preceded in death by her mother, Lois Scales McClanahan of Prentiss, Mississippi, her step-mother, Mrs. Minnie Bell McClanahan of Forrest City, one brother, Wallace McClanahan of Earle, an adopted brother, Harold McClanahan of Pangburn, one step-brother, Billy Taylor of Peroria, Illinois, one step-sister, Earlene Blankenship of Texas. She is survived by three sons; Edward J. 'Jack' Doler Jr., of Memphis, Danny P. Doler of Palestine, Jerry W. 'Red' Doler of Forrest City, one daughter, Carolyn J. Doler of Colt, one sister, Mildred Winsett of Cordova, Tennessee, two half sisters; Helen McClanahan Ross of Searcy and Paulette McClanahan Clark of Hernando, Mississippi, three grandsons and three granddaughters, two great-grandsons (twins) and eight great-granddaughters, and one great-great-grandchild. Services for Mrs. Doler will be held Graveside, 2:00 P.M., Sunday, at the Forrest Park Cemetery in Forrest City. Visitation will be Sunday, 1:00 P.M., until the time of the service, at Stevens Funeral Home with Stevens Funeral Home in charge of arrangements. You may log on to stevensfuneralhome.net for the online registry. Mary Doler gave love to all her family and friends and received love in return from most. She will be greatly missed.

Mary E. Doler, age 91, died peacefully Wednesday, December 26, 2018, at the River Ridge Rehab and Care Facility in Wynne, Arkansas. She was born July 8, 1927, in the small town of Dennis, Mississippi. She was the matriarch of the Doler family,... View Obituary & Service Information

The family of Mary E. Doler created this Life Tributes page to make it easy to share your memories.

Send flowers to the Doler family.