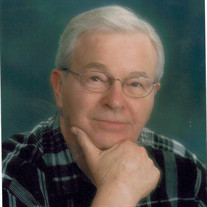 Marvin Phillip Hemme, age 82, of Brinkley, formerly of Forrest City, passed away on the morning of February 22, 2020, surrounded by his family. Mr. Hemme was born July 19, 1937, in Stuttgart, Arkansas, and was the son of Oswald and Lelia (Gerlach) Hemme. After graduating Stuttgart High School in 1955, he served in the Air Force working as a cartographer. In 1962, he married Hannah Martin and worked for Cox Heating and Air in Stuttgart. In 1976, Marvin and Hannah moved to Forrest City and established Hemme Air Conditioning. Mr. Hemme worked as a lobbyist for the Arkansas Heat Pump Association and he co-wrote Act 277 of Arkansas Legislature which requires HVACR licensure. He was voted as the first chairman of the Arkansas HVACR Board, where he served from 1991 to 1997. He was given the honor of the first Arkansas HVACR license-HVACR#000001. He served two terms as Forrest City Kiwanis Club President. He is survived by his wife of fifty-eight years, Hannah Martin Hemme; one daughter, Holly (Jeremy) Jenkins of Bryant, Ar., one son, Marc (Stephanie) Hemme of Forrest City, Ar., seven grandchildren; Matthew Hemme, Seth Jenkins, Marc Jenkins, Joshua Hemme, Ethan Hemme, Elizabeth Jenkins, and Aurora Hemme. He was preceded in death by his parents, four sisters, and one brother. The Hemme family would like to express their deepest gratitude to Patient's Choice Hospice, Dr. James T. Meredith, Arkansas Alzheimer's Association and Mr. Brandon Harris for the care they gave him during his last few years. A visitation will be held at Stevens Funeral Home Chapel 6:00 till 8:00 P.M., Monday. Stevens Funeral Home is in charge of arrangements. Donations are welcome to the Arkansas Alzheimer's Association, Central Arkansas Regional Center, 411 S. Victory, Suite 202, Little Rock, Arkansas 72201, or the First United Methodist Church Chancel Choir, P.O. Box 66, Forrest City, Arkansas 72336. You may log on to stevensfuneralhome.net for the online registry.

Marvin Phillip Hemme, age 82, of Brinkley, formerly of Forrest City, passed away on the morning of February 22, 2020, surrounded by his family. Mr. Hemme was born July 19, 1937, in Stuttgart, Arkansas, and was the son of Oswald and Lelia... View Obituary & Service Information