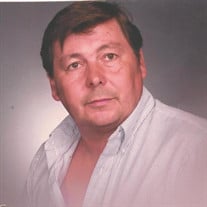 Marty Paulsen, age 80, of Austin, Arkansas, died Friday, April 30, 2021, at the Chambers Nursing Home in Carlisle, Arkansas. He had been in poor health for the past three years. Marty was born February 16, 1941, in Long Island, New York, and was the son of Martin E. Paulsen Sr. and Agnes Schlender Paulsen. He was in the United States Air Force, Vietnam, and had lived in many places inside and outside of our country. He was an electronics technician while serving in the military, belonged to various car clubs, and was a member of the Episcopal Church. Marty died from complications, that was service connected, from Parkinson's Disease. Parkinson's Disease was from the exposure to the defoliant, Agent Orange, while stationed in Thailand. After serving twenty-three years in the U.S.A.F., he worked three years for Motorola, and another fifteen years for the U.S. Army Corp of Engineers in Little Rock. Marty married Peggy W. Gray in 1962, and she survives him along with one son, John Paulsen, and wife, Shelley, of Hartselle, Alabama, and three grandchildren; Alex, Ben, and Rachel, and husband, Josh. He had one son, James Paulsen who preceded him in death. He also has one sister, Anne Marie Perkins, and husband, Ken of Hudson, New York, four sisters-in-law; Evie Bramel of Moro, Barbara Mason, and husband, Sonny, of Munford, Tennessee, Frankie Griffin, and husband, Gene, of Lewisville, Texas, and Shirley Linder, and husband, Ralph, of Lafayette, Indiana, and one nephew, Mike. Services for Mr. Paulsen will be held Graveside, 1:00 P.M., Saturday, at the Loughridge Cemetery in Colt. Services will be officiated by his brother-in-law, Gene Griffin. Stevens Funeral Home is in charge of arrangements. You may log on to stevensfuneralhome.net for the online registry.

Marty Paulsen, age 80, of Austin, Arkansas, died Friday, April 30, 2021, at the Chambers Nursing Home in Carlisle, Arkansas. He had been in poor health for the past three years. Marty was born February 16, 1941, in Long Island, New York, and... View Obituary & Service Information

The family of Marty Paulsen created this Life Tributes page to make it easy to share your memories.

Send flowers to the Paulsen family.