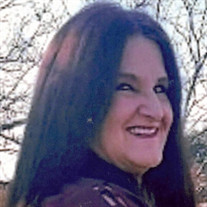 Margaret Ann Spencer, age 60, of Atkins, Arkansas, died Saturday, February 27, 2021, at her home in Atkins. Her death came sudden and unexpected. Mrs. Spencer was born June 19, 1960, in Forrest City, and was the daughter of Marvin T. Moore and Hazel M. Deaviser Moore. She was a homemaker and a member of the Midway Baptist Church. Mrs. Spencer married Sam Spencer and he preceded her in death. She is survived by three sons; Christopher Michael Lauderdale of Wonderview, Arkansas, Allen Derrick Lauderdale and Nathaniel 'A.J.' Spencer, both of Atkins, Arkansas, two step daughters Donna Spencer and Paula Spencer and a step son Jimmy Dale Spencer, three brothers; Tony C. Moore of Jacksonville, Arkansas, Richard Allen Moore of Palestine, and Leon Moore of Brinkley, three sisters; Rose Marie Dent of Elpaso, Arkansas, Judy Burns and Desha Keeling, both of Palestine, eight grandchildren and several great-grandchildren. She was preceded in death by one son, Tommy Lauderdale, and one brother, Paul Moore. Services for Mrs. Spencer will be held at Stevens Funeral Home Chapel, 10:30 A.M., Wednesday, with burial in Bell Cemetery. Visitation will be Wednesday, 9:30 A.M., until the time of the service. Stevens Funeral Home is in charge of arrangements. You may log on to stevensfuneralhome.net for the online registry.

The family of Margaret Ann Spencer created this Life Tributes page to make it easy to share your memories.

Send flowers to the Spencer family.