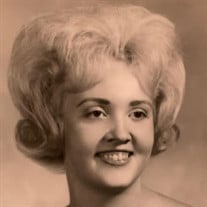 Linda L. Clark Thweatt, age 74, of Forrest City, died Friday, July 23, 2021, at her daughter's home in Palestine. She had been in poor health for the past three months. Linda was born August 30, 1946, in Forrest City, and was the daughter of Charles 'Sonny' Clark and Allean Shaw Clark. She lived in Palestine and Forrest City most all of her life, was a bookkeeper for Sears Credit Union, Cecil Clark CPA, Proctors Seed & Feed, Masey Ferguson, Palestine Water Department, Minor Medical, Sawmill Restaurant, St. Francis County 911 Co-ordinator, and retired in 2016 from the St. Francis County Nearco. She distributed commodities for so many and would give the shirt off her back for others. She was a member of the Beck Spur Baptist Church. Linda graduated in 1964 and married Cecil Thweatt. He preceded her in death in 2013. She is survived by two daughters; DeNae Lynn Thweatt of Orange Beach, Alabama and Shannon Thweatt Bridges, and husband, Greg, of Palestine, one son, Technical Sergeant, retired Air Force, Michael Shane Thweatt of Panama City, Florida, her mother, Allean Shaw Clark of Forrest City, three grandchildren; Darron Booker, DaKota Bridges, and Arial Thweatt, two great-grandchildren; Kaegan and Rayden, one step-daughter, Lisa Thweatt Williams, and husband, Mark, of Alamo, Tennessee, one sister, Yvonne Stidham of Bradford, Arkansas, and several nieces and nephews that she dearly loved. She was preceded in death by her father, Charles 'Sonny' Clark, a grandson, Heath Booker, her paternal grandparents; Oscar and Miranda Clark, and her maternal grandparents; Caleb and Kitty Shaw. Services will be held at the Beck Spur Baptist Church, 11:A.M., Tuesday, July 27, 2021, with burial in Forrest Park Cemetery. Visitation will be Monday evening, 6:00 till 8:00 P.M., at the church, with Stevens Funeral Home in charge of arrangements. You may log on to stevensfuneralhome.net for the online registry.

Linda L. Clark Thweatt, age 74, of Forrest City, died Friday, July 23, 2021, at her daughter's home in Palestine. She had been in poor health for the past three months. Linda was born August 30, 1946, in Forrest City, and was the daughter of... View Obituary & Service Information

The family of Linda L. Clark Thweatt created this Life Tributes page to make it easy to share your memories.

Send flowers to the Thweatt family.