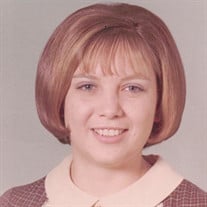 Linda Jeanine Burns Martin, age 66, of Springdale, Arkansas, died Saturday, May 11, 2019, at the Willard Walker Hospice Home in Fayetteville, Arkansas. Mrs. Martin was born October 21, 1952, in Forrest City, and was the daughter of James Ray 'Jimmy' Burns and Gloria Jean 'Patsy' Billingsley Burns. She lived in Palestine until moving to Springdale and was a retired hair dresser. Mrs. Martin married Terry Lee Martin Sr., in 2004, and he survives her along with two sons; Jamie McCoy, and wife, Jennifer, and Blaine McCoy, and wife, Ashley, all of Palestine, one daughter, Amy Jo Guinn, and husband, Robby, of Jay, Oklahoma, two brothers; Donnie Burns of Palestine and Jay Burns of Marion, five grandchildren; Jackson, Luke, Lacey, Carter, and Cole, one great-grandchild, John Luke. Services for Mrs. Martin will be held at Stevens Funeral Home Chapel, 11:00 A.M., Tuesday, with burial in Bell Cemetery. Visitation will be Tuesday, 10:00 A.M. until the time of the service. Stevens Funeral Home is in charge of arrangements. You may log on to stevensfuneralhome.net for the online registry.

The family of Linda Jeanine Burns Martin created this Life Tributes page to make it easy to share your memories.

Send flowers to the Martin family.