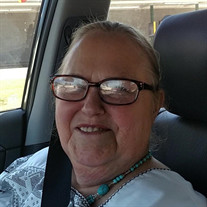 Laurel Stogden, age 65, of Forrest City, died Monday, April 4, 2022, at her home in Forrest City. Mrs. Stogden was born February 12, 1957, in Elgin, Illinois, and was the daughter of James Moore and Margaret Mary 'Peggy' Patrick. She lived in California before moving to Arkansas, and was a Catholic. Mrs. Stogden is survived by one son, Daniel Stogden of North Carolina, two daughters; Michelle Grajeda of California and Jennifer Stogden of Utah, her father and step-mother, James and Rebecca Moore of Forrest City, two brothers, Hamilton Moore and wife, Angie, of Marion, and Mike Moore, and wife, Doreen, of California, one sister, Patty Spain, and husband, Jim, of Paragould, seven grandchildren; Dominic Stogden, Caleb Stogden, Rylen Stogden, Alyssa Fernandez, Ally Fernandez, Vanessa Severns, and Naythan Fisher. She had two brothers; George Moore and Joseph Moore, who preceded her in death. A memorial service will be held at Stevens Funeral Home Chapel, 2:00 P.M., Saturday, April 16, 2022, with burial to follow in Hughes Cemetery. Visitation will be Saturday, April 16, 2022, 1:00 P.M., until the time of the service at Stevens Funeral Home, with Stevens Funeral Home in charge of arrangements. You may log on to stevensfuneralhome.net for the online registry.

The family of Laurel Stogden created this Life Tributes page to make it easy to share your memories.

Send flowers to the Stogden family.