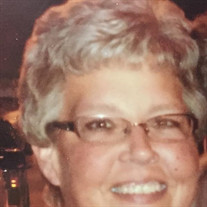 Mrs. LaNan Holmes Kennedy, age 56, of Forrest City, died Monday at the St. Bernard's Hospital in Jonesboro. LaNan was born September 21, 1961, in Fayetteville, Arkansas, and was the daughter of Sonny Holmes and Murry Bean Holmes. She lived in Forrest City most of her life and was a member of the First United Methodist Church. LaNan is survived by her parents; Sonny and Murry Holmes of Forrest City, one stepson, James David Kennedy of Monroe, Louisiana, one sister, Lou Blaylock, and husband, Richard, of Forrest City, and two nieces; Ashley Blaylock Stricklin, and husband, Colt, and Sara Beth Blaylock, all of Forrest City. She was preceded in death by her sister, Brenda Holmes McClendon, and her niece, Kayla Rae McClendon. LaNan is best remembered for her unconditional love for her family and friends, and yes even in bad times, the Hogs. Rarely was there a dull moment when LaNan was near. She would keep you laughing and never hesitated to laugh at herself. LaNan treasured the times she spent with family and friends. She will be dearly missed by all. Services for LaNan will be held Graveside, 1:00 P.M., Wednesday, at the Forrest Park Cemetery in Forrest City. Stevens Funeral Home is in charge of arrangements. Memorials are to be made to the Mid-South Transplant Foundation, 8001 Centerview Parkway #302, Cordova, Tennessee 38018, or Special Olympics of Arkansas Area-E8, P.O. Box 1857, Forrest City, Arkansas 72336, or First United Methodist Church, P.O. Box 66, Forrest City, Arkansas, 72335. You may log on to stevensfuneralhome.net for the on line registry.

The family of LaNan Holmes Kennedy created this Life Tributes page to make it easy to share your memories.

Send flowers to the Kennedy family.