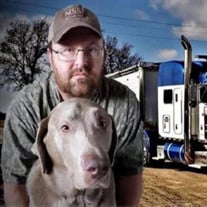 Jonathan Daniel Marotti, age 43, died Friday, May 7, 2021, at his family's farm headquarters in Crawfordsville, AR. His death came suddenly and unexpectedly. Mr. Marotti was born November 11, 1977, in Memphis, TN to Johnny and Sandra Chaney Marotti. He was the owner and operator of J & S Marotti Trucking, farm manager for Buckskin Farms, and founder of Grassy Lake Bottoms Duck Club in Crawfordsville, AR. He was a member of First Assembly of God in West Memphis, AR. Mr. Marotti is survived by his parents; two sisters; Jenny Fraley of Marion, and Candice Carroll and husband Johnny of Crawfordsville; seven nieces and nephews; Amelia Fraley, Andrew Fraley, Levi Fraley, and Demi Fraley, all of Marion, and Chesleigh Gatgens, Johnny Carroll, and Julia Carroll, all of Crawfordsville; and his beloved dog Marley. He was known as Uncle Jon Jon and was the world's best Uncle, always entertaining his nieces and nephews. He was preceded in death by his maternal grandparents, Robert and Myrtis Chaney, and his paternal grandparents, Johnnie and Mary Marotti, and Flossie Mae Marotti and his brother in law, Martin Fraley. Services for Mr. Marotti will be held on Wednesday, May 12, 2021, at 1:00 P.M at First Assembly of God Church, in West Memphis, AR with burial at Crittenden Memorial Park in Marion, AR. Visitation will be from noon until the time of service at First Assembly of God Church. Stevens Funeral Home is in charge of arrangements. Memorials may be made to First Assembly of God Church, 513 N. Missouri St, West Memphis, AR, 72301. You may log on to stevensfuneralhome.net to sign the online registry.

The family of Jonathan Daniel Marotti created this Life Tributes page to make it easy to share your memories.

Send flowers to the Marotti family.