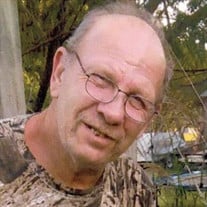 Mr. John L. 'Johnny Boy' 'Rambo' Henderson, age 60, of Pine Tree, died Friday, September 18, 2020, at the St. Bernard's Hospital in Jonesboro. He had been in poor health for the past two months. Mr. Henderson was born January 21, 1960, in Maryland, and was the son of Ollie C. Henderson and Goldie Mae Cox Henderson. He lived in the Pine Tree and Colt area most all of his life, he was in bridge work construction, and was a Baptist. Mr. Henderson married Patricia 'Patty' Williams in 1979, and she survives him along with one daughter, Tricia Henderson of Colt, one grandson, Brayden Henderson, four sisters; Willie Mae Scanlon, Marie Windsor, Louise McGee, and Wanda Parsons, one brother, Buster Henderson, his mother-in-law, Dolly Fourthman of Colt, and his brother-in-law, Stanley Williams of Colt. He had two brothers; Harrell Henderson and Buddy Henderson, father-in-law, Clinton Williams, and sister-in-law, Judy Brown, who all preceded him in death. Services for Mr. Henderson will be held at Stevens Funeral Home Chapel, 2:00 P.M., Tuesday, with burial in Barnishaw Cemetery. Visitation will be Monday evening, 6:00 till 8:00 P.M., with Stevens Funeral Home in charge of arrangements. You may log on to stevensfuneralhome.net for the online registry.

The family of John L. 'Johnny Boy' 'Rambo' Henderson created this Life Tributes page to make it easy to share your memories.

Send flowers to the Henderson family.