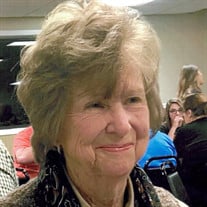 Joan Sayre Brawner passed away peacefully in her home, Thursday, September 5, 2019. She was surrounded by her children, her precious, God-sent care giver, Ethel Jannette Todd, and her faithful, most beloved dog, Gracey. Mrs. Brawner was born, October 18, 1934, in West Memphis, Arkansas, and was the daughter of Clarence Edgar Sayre and Della Poole Sayre. She lived most of her young life in Crittenden and Cross County, Arkansas. She graduated from Wynne High School. On March 1, 1952, Joan married Everette Lee Brawner. In 1956, they had a son, Mark Everette. In 1958, they had a daughter, Marilyn Joan. They moved their young family several places while Mr. Brawner worked in the grocery business. In 1962, they moved their family to Forrest City, Arkansas, where Mr. Brawner began a successful career in the insurance business. Mrs. Brawner began working for Sears. It wasn't long before she began to work as a secretary for the Forrest City Public Schools. She began at Central Intermediate, then Forrest Hills Elementary, and she finished her secretarial career at Madison Montessori School. Around 1970, Mr. and Mrs. Brawner moved to a hill out on Crowley's Ridge and made their final home together. Mr. Brawner preceded her in death, June 30, 2002. They had been married fifty years. Oh what a happy reunion must have taken place just a little while ago. Mrs. Brawner is survived by her son, Mark Everette Brawner, and wife, Janet, her daughter, Marilyn Joan Gaskin, and husband, Darrell, four grandchildren; Adam Brawner and Ginny, Karen Neal and John, Sayre Morgan and John, and Mac Gaskin and Tori, and three great-grandchildren; Harper Morgan, Kendall Neal, and Willow Gaskin. Mrs. Brawner's wishes were to be cremated and laid to rest by her family. Memorials may be made to the St. Jude Children's Research Hospital, 501 St. Jude Place, Memphis, Tennessee, 38105-9959. Stevens Funeral Home is in charge of arrangements. You may log on to stevensfuneralhome.net for the online registry.

Joan Sayre Brawner passed away peacefully in her home, Thursday, September 5, 2019. She was surrounded by her children, her precious, God-sent care giver, Ethel Jannette Todd, and her faithful, most beloved dog, Gracey. Mrs. Brawner was born,... View Obituary & Service Information

The family of Joan Sayre Brawner created this Life Tributes page to make it easy to share your memories.

Joan Sayre Brawner passed away peacefully in her home, Thursday,...

Send flowers to the Brawner family.