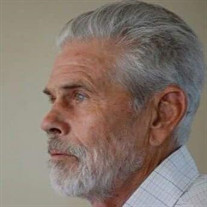 Mr. James 'Jimmy' Luker, age 77, of Forrest City, died Saturday, June 22, 2019, at his home in Forrest City. Mr. Luker was born July 3, 1941, and was the son of James Alvin Luker and Martha Isabelle Brewer Luker. He lived in Palestine and Forrest City most all of his life, was a parts man for Crain Auto Parts and Dangeau Auto Parts, was a carpenter, a Veteran of the Army National Guard, and a Baptist. Mr. Luker married Bessie Kate Stewart and she preceded him in death in 2016. He is survived by two daughters; Lisa Smith, and husband, Rich, of South Carolina, and Danielle Deere, and husband, Scott, of Forrest City, one brother, Alvin Luker of Palestine, one sister, Diane Reed of Palestine, six grandchildren; Kathryn, and husband, Jerry, Cory, Justin, Ethan, Erica, and Valerie, one great-grandchild, Lillyana Smith, and one special friend and caregiver, Karen Golden. He had one brother, Paul Luker, who preceded him in death. Services for Mr. Luker will be held at Stevens Funeral Home Chapel, 2:00 P.M., Saturday, with burial in Forrest Park Cemetery. Visitation will be Friday, 5:00 till 7:00 P.M., at the funeral home, with Stevens Funeral Home in charge of arrangements. The family request memorials to be made to the Bethel Baptist Church, P.O. Box 321, Forrest City, Arkansas, 72336, or to a charity of one's choice. You may log on to stevensfunealhome.net for the online registry.

The family of James 'Jimmy' Luker created this Life Tributes page to make it easy to share your memories.

Send flowers to the Luker family.