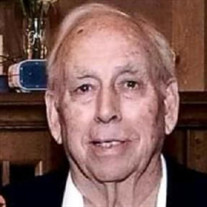 Mr. James 'Joe' Goff, age 89, of Forrest City, died Wednesday, December 23, 2020, at his home in Forrest City. He had been in poor health for the past year. Mr. Goff was born May 23, 1931, in Cave City, Arkansas, and was the son of Lloyd Goff and Eula Johnson Goff. He served as the Forrest City Chief of Police, 1975 till 1995, was a Veteran of the Air Force, and was a member of the First Baptist Church. Mr. Goff married Mary Sutton in 1954, and she preceded him in death in 2003. He married Nancy Smith in 2009, and she survives him along with one daughter, Sherry Shepherd, and husband, Glenn, of Forrest City, one son, Jeff Goff, and wife, Tiffanie, of Palestine, two grandchildren; Kristen and Keri Shepherd, and four great-grandchildren; Jayce Collums, Bryce Hopson, Landon Renigar, and Emma Goff. He was preceded in death by one son, Mike Goff, one sister, Agnes Clay, and two brothers: L. J. Goff and Marshall Goff. Services for Mr. Goff will be held Graveside, 2:00 P.M., Monday, at the Forrest Park Cemetery in Forrest City. Stevens Funeral Home is in charge of arrangements. Memorials may be made to the First Baptist Church, 'Wheelchair Ramp Ministry' 507 N. Rosser, Forrest City, Arkansas, 72335, or to the Arkansas Children's Hospital, #1 Children's Way, Little Rock, Arkansas, 72202. You may log on to stevensfuneralhome.net for the online register.

The family of James 'Joe' Goff created this Life Tributes page to make it easy to share your memories.

Send flowers to the Goff family.