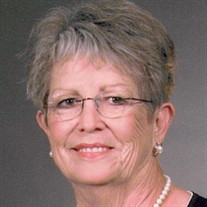 Gloria Kay Courtney Though our hearts are broken, we rejoice in announcing that our precious Mama and Mamaw, Gloria Kay Courtney, age 85, of Forrest City, Arkansas, was called to her Heavenly home on Thursday, January 27, 2022. She was surrounded by her loving family. Mrs. Courtney was born on September 1, 1936, in Forrest City to Thomas Cox and Laverne Rose Cox where she grew up the oldest of 8 children. During her years at Forrest City High School, she played the clarinet and was a majorette in the marching band. Wayne Courtney has always been most proud of her honor to be voted Most Beautiful at FCHS. Following graduation, she married the love of her life of 67 years, Wayne Neely Courtney and went on to have 4 daughters. Together, Wayne and Gloria owned Courtney Oil Company, that they later sold. Gloria continued to work in the gas business at Synergy Gas Corporation for many years. Outside of work, she dedicated her life to giving back to her community, her church, her art, and most of all, her family. For more than 50 years, she served the First Baptist Church and was an outstanding philanthropic example to her community through volunteering with Hospice, being actively involved in Happy Dayers, Master Gardeners, Musical Coterie, Rolling Readers, and so much more. Her Sundays were important to her, not only through worship, but also through her love for spending time in the kitchen, creating Sunday lunch for her children and grandchildren. Gloria lived out the remainder of her life continuing her service to her church and community, creating beautiful artwork, and surrounding herself in the love of her family. She is survived by her husband, Wayne Neely Courtney, along with her daughters; Sonya Poe, Cindy (Allen) Massey, Susan (Mike) Hanson and Cheryl (Dutch) Wiemeyer, seven grandchildren; Meredith Poe Reeves, Melanie Massey, Michelle Massey Garner, Courtney Massey Nance, Jennifer Hanson Jackson, Mitch Hanson and Jessie Hanson Watson, and 12 great grandchildren; Neely Poe, John Henry Poe III, Brayden Harris, Cody Garner, William and Charlotte Nance, Mackenzie Jackson, Henry, Georgia and Hayden Hanson and Jack and Max Watson. She is also survived by her two sisters; Linda Farr and Connie Johnson, and three brothers; Thomas Cox Jr., Mickey Don Cox, and Phillip Cox. She was preceded in death by two brothers; Billy Steve and Walter Barry Cox, one son-in-law, Johnny Poe, and one grandson, Michael Poe. A special heartfelt thank you to her loving friends and caregivers, Teresa Michael and Bonnie Oates, as well as the staff of Elite Hospice of Forrest City. A private graveside was held Sunday, January 30, 2022, at Bell Cemetery, Palestine. The family requests that memorials be made to: Gloria Courtney Memorial Fund at St. Jude, St. Jude Children’s Research Hospital, 501 St. Jude Place, Memphis, Tennessee, 38105-9959. Stevens Funeral Home was in charge of arrangements. You may log on to stevensfuneralhome.net for the online registry.

Gloria Kay Courtney Though our hearts are broken, we rejoice in announcing that our precious Mama and Mamaw, Gloria Kay Courtney, age 85, of Forrest City, Arkansas, was called to her Heavenly home on Thursday, January 27, 2022. She was surrounded... View Obituary & Service Information

The family of Gloria Kay Courtney created this Life Tributes page to make it easy to share your memories.

Gloria Kay Courtney
Though our hearts are broken, we rejoice...

Send flowers to the Courtney family.